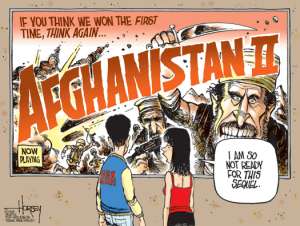 After more than three months' deliberation, President Barack Obama has finally decided to commit more than 30,000 US troops to the Afghan war. The Afghan surge is to be fast tracked over the next six months with a large bulk of the troops arriving before Christmas. The deployment will cost approximately $1 million dollars per soldier, per year, some $30 billion overall. This price tag is on top of the considerable costs (running into the hundreds of billions of dollars) of keeping over 100,000 US soldiers in-country, while maintaining other US global military operations as well as the on-going fiasco in Iraq. The combined deployment of US troops in Iraq and Afghanistan is close to 250,000 service personnel, which is augmented by the greatest number of private military contractors/mercenaries ever seen (some 100,000 in Iraq alone).

President Obamas efforts to keep everyone on-side (with one eye on re-election in 2013) has had the effect of achieving the complete opposite. The US General in charge, Stanley McChrystal, will not get the 45,000 troops he requested but just enough troops to guarantee failure (it is doubtful that 300,000 additional US troops would make the slightest difference to the quagmire in Afghanistan). Republicans have accused Obama of dithering over the decision-making process and undermining the US military by indicating that US (and presumably NATO) forces will withdraw by 2011. Those on the left and in the peace movements will point to the troop escalation and Obamas War as an indication that he has failed those who believed in change. Meanwhile a recent poll indicates that 63% of Americans are against a further deployment, 51% say the war is "not worth fighting" and that ending the foreign occupation will "reduce terrorism".

Reports indicate that the Obama administration seems to think that it can recruit, train and deploy hundreds of thousands of Afghan soldiers and police who will eventually step-in as NATO forces step down. There is pressure on the bankrupt Karzai government (a president who can barely leave his Kabul compound for fear of losing his life), to achieve mission impossible. The Afghan government forces are regarded as ill-disciplined, corrupt and infiltrated by the Taleban. According to the Guardians Ewen MacAskill the Afghan army has a loss rate of about 25% of its members, the bulk of whom just walk away.

Obama is banking on his surge producing results, however, according to Robert Fisk, the Independents award winning Middle Eastern correspondent, instead of sending gun wielding soldiers he should have sent doctors, teachers and engineers. The Afghans have seen very little improvement in their day-to-day lives over the last eight years of perpetual war. NATO drone attacks, like the one that vaporised approximately 90 innocent civilians at a fuel tanker, are alienating the population. These are not isolated incidents. In September, The Guardian reported that an RAF C-130 Hercules dropped leaflets over an Afghan village; one box failed to disperse in mid-air and instead struck a young girl. An RAF spokesperson stated: "It is a matter of deep regret that one of the boxes failed to fully open and on landing caused serious injuries to an Afghan child." The young girl later died in hospital. Johann Hari in the Independent reported that Lt. Col. David Kilcullen, who was a counter-insurgency advisor in Iraq, commented that that US aerial attacks on the Afghan-Pakistan border have killed 14 al-Qa'ida leaders, at the expense of more than 700 civilian lives. He went onto to say: "That's a hit rate of 2 per cent on 98 per cent collateral. It's not moral."

The exact figure for the numbers of Afghan dead is not known (the US doesnt do body-counts apparently) but it is sure to run to the many thousands. One US professor commented that prior to the outbreak of hostilities in the winter of 2001; millions of Afghans were in danger of starvation if the bombing interfered (as it did) with aid convoys from Pakistan. The killing of innocent civilians rubbishes the campaign to win the Orwellian phrased battle for hearts of minds and instead drives hostile Afghans into the arms of the resistance, fuelling a war without end.

The wider instability the war is creating is of equal concern. Pakistan has seen a dramatic surge in violence, with suicide bombers penetrating to the heart of the government and military establishment. The immediate fear is for the security of Pakistans nuclear weapons sites. The country runs the real risk of descending into the kind of all out Somali-style anarchy, associated with a failed state. The impact of Pakistan ceasing to function as a viable state on India, Iran and Kashmir is too enormous to contemplate.

As Obama travels to Oslo to pick up his Nobel Peace Prize, the long slow march to human destruction has been set firmly in train. Afghanistan, a mountainous and largely unforgiving land, is regarded as the graveyard of empires. Alexander the Great, Genghis Khan, the British Empire (which is currently engaged in its fourth Afghan War) and the Soviet Union all suffered dramatic losses and were forced into humiliating retreats. It is unlikely that it will be any different this time round.

http://www.indymedia.ie/article/94988
Indymedia Ireland is a media collective. We are independent volunteer citizen journalists producing and distributing the authentic voices of the people. Indymedia Ireland is an open news project where anyone can post their own news, comment, videos or photos about Ireland or related matters.