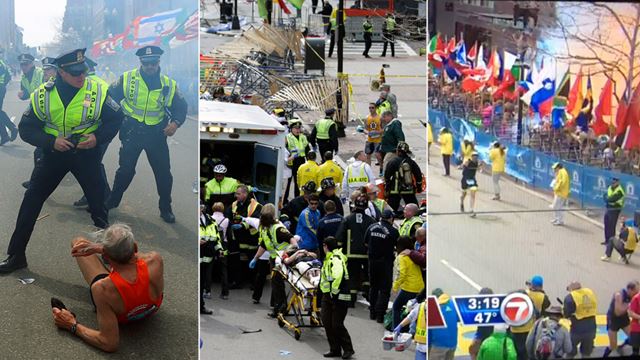 Today, for a brief moment, America knows how awful it feels to live in one of the states they have invaded or that they have helped reduce to sectarian nightmares with imported jihadist mercenaries, CIA advisors, funds and weaponry, such as Iraq, Syria or Libya, where explosions like this occur every other day


"144 wounded, including 15 critical. 3 dead so far in boston bombing"
Yes it was certainly a very tragic and terrible event. No doubt about that.

However, this stuff happens in Afghanistan / Iraq / Libya every other week.

But then...those are just poor brown people, not American citizens, so they don't really count do they?

And needless to say, this potential epiphany will be lost on a sleepwalking US population.

Expect US government to dust off some previously written plans to invade someone else, probably someone with oil or strategic value.

The reality is it's probably home grown anti government sentiment that drove this.

After all, it is the anniversary of WACO and it's also TAX DAY

However, there will be much more on this as it saturates the airwaves in the coming week, while people die in droves in Africa, India and the middle east, with barely a murmur. Also expect hypocrisy on what constitutes terrorism. Watch the MSM gloss over the continuing financial and logistical support of self declared Al Qaeda terrorists in Syria, vs terrorists who dare to do exactly the same thing on US soil

http://www.indymedia.ie/article/103544
Indymedia Ireland is a media collective. We are independent volunteer citizen journalists producing and distributing the authentic voices of the people. Indymedia Ireland is an open news project where anyone can post their own news, comment, videos or photos about Ireland or related matters.