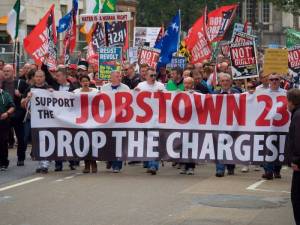 To help highlight the case of the Jobstown 18 we are republishing an open letter by Irish Writers.

We write as writers concerned with the impact of proposed jury restrictions in the case of the Jobstown 18 on freedom of expression in Ireland.

These three proposed restrictions from the DPP are particularly objectionable in this regard:

People from the Jobstown/Tallaght area and people with such connections to the area as would give rise to a concern thatthey could not deal with the case impartially.

Persons who are active in any campaigning groups either for or against water charges (whether formal or informal).

Persons who have expressed themselves in public, whether on the Internet, in the print media (newspapers), broadast media(radio or television), on social media (including Facebook, Twitter, on-line comment pages of websites or newspapers or any other form of social media) or otherwise on publically available mediums, on issues concerning water charges and/or the events on the 15th November 2014.

We believe that these absurd restrictions, if enacted, would allow for the handpicking of a jury intentionally & heavily weighted against the defendants. Everyone in Ireland has been involved in the water charges debacle; it is one of those issues where you are either for or against it.

Going by the proposed restrictions only those who are for water charges will be allowed on the jury, deciding the case in advance in favour of the state & the privateers. This is the tactic of a dictatorship, a show-trial tactic.

Every member of a trade union is signed up to the water charges campaign through ICTU. Besides this the vast majority of the Irish working class have campaigned or expressed themselves against the charges. Therefore these restrictions exclude almost the entire Irish working class  that is, all those who could justly be regarded as peers of the Jobstown 18 from serving on a jury which is to decide their guilt or innocence on charges of an extremely serious nature.

Also, it would be comical to suggest that the state is neutral on the issue of the monetisation of Irish water resources. The state has at all times been an active agent in the promotion of water charges. Should the state be true to principle of legal neutrality, it would have to withdraw the charges. Water charges campaigners being tried by the Irish State is the equivalent of mice being tried by cats  it is patently & a priori imbalanced & fundamentally unjust.

Sadly, it is obvious to us as it to so many other observers in Ireland & Internationally that this whole affair is not in the least a matter of neutral justice, but of political revenge against a movement which has shaken corporate Ireland to the core.

Attempting to stack the jury against the peaceful defenders of the principle of free water is of a piece with the uncalled for aggression of Gardai against working class communities throughout the water charges campaign, with the deliberate & co-ordinated villification of working class protesters by the corporate & state media, with the dawn raids against campaigning teenagers, with the fake outrage against water defenders expressed in often lurid terms by right wing politicians.

In a deeply divided class society such as Ireland, where all mainstream means of expression are effectively under the control of a tiny & undemocratic minority acting solely in their own minority interests at all times, the only form of expression left to the majority is protest. It is therefore absolutely vital for any form of democracy to operate in ireland that the right to peaceful protest, including sit-down protest & including the temporary inconveniencing of politicians be defended.

Put plainly, the aim of the repression of the water charges campaign is to shut the working class up so the ruling class can get on with with its business of privatising everything & making as much profit as can be made without regard to the social & cultural consequences for everybody else.

We therefore call on all with a genuine interest in freedom of expression in Ireland to join with us in condemning the attempt by the DPP to pack the Jury against the Jobstown 18, whose courage, principle & dignity we honour & admire.

Related Link: https://bogmanscannon.com/2017/04/21/irish-writers-open-letter-on-the-jobstown-27/
http://www.indymedia.ie/article/106137
Indymedia Ireland is a media collective. We are independent volunteer citizen journalists producing and distributing the authentic voices of the people. Indymedia Ireland is an open news project where anyone can post their own news, comment, videos or photos about Ireland or related matters.