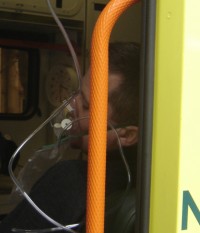 Hunger striker Gordon McNeill has been rushed to City Hospital for treatment. An ambulance was called to the scene at Transport House due to a deterioration in his condition. Gordon is on his fourth day without food and his second day without water. Also on hunger strike are Madan Gupta and Chris Bowyer. The former airport shop stewards have taken the action to demand talks with the leadership of Unite/TGWU, who have refused to meet with the workers.

Doctors are warning that serious kidney damage has probably occured to both Madan Gupta and Gordon McNeill.

Gordon McNeill has been released from hospital and has now rejoined the hunger-strike protest outside Transport House.

http://www.indymedia.ie/article/87102
Indymedia Ireland is a media collective. We are independent volunteer citizen journalists producing and distributing the authentic voices of the people. Indymedia Ireland is an open news project where anyone can post their own news, comment, videos or photos about Ireland or related matters.