Alan Shatter's Methods Like "that Of Nazi Propaganda Minister" 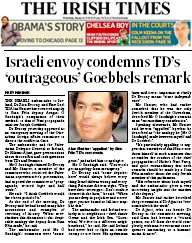 The Irish Times in a front page article expose their total lack of journalistic focus.

One of the problems with the media today is their tendency to focus on scandals as opposed to analysing the spin coming from the political establishment. Instead of offering the public a critical eye of the spin, the media likes to focus on big scandals as thats what sells papers. The desire to focus on a scandal often means that the substantive issue that should have been focused on gets ignored in the tabloid style moral outrage. Wednesday last, 14th January, in a front page article by Mary Minihan we were exposed to a crass example of the problem I have expressed. Read The Irish Times article here.

During the Israeli ambassador's visit to the Dáil, at an emergency meeting of the Oireachtas Foreign Affairs Committee to discuss the conflict in Gaza, Aengus Ó Snodaigh (Sinn Féin TD) attacked the ambassador and resident Zionist Alan Shatter, Fine Gael TD. It seems that Aengus, unhappy with the spin that the two were bringing into the debate compared their methods to that of Nazi propaganda minister Joseph Goebbels. Aengus was unhappy with their attempts to expose the Oireachtas committee to propaganda, twisted logic and half truths.


Full Quote: 'I ask Deputy Shatter, who spoke about the relationship between Sinn Féin and violent groups, to reflect on his relationship with one of the most violent states in the world. He could do much more to appeal to that country to end its violence. The arrogance of the Israeli ambassador and Deputy Shatter seems to know no bounds. The comments they have made at todays meeting are a form of propaganda. Goebbels would have been proud of the twisted logic and half-truths to which they have exposed this committee. I do not say that lightly. They are trying to justify the unjustifiable, which is what Goebbels and his colleagues tried to do during the Holocaust. What we have heard today...' - debates.oireachtas.ie


What were these propaganda, twisted logic and half truths? Unfortunately for us we arent informed of what they were. Instead we are told At the end of the meeting, Dr Evrony said he had heard many false accusations and examples of rewriting of history. What overshadows this discussion is this despicable analogy the deputy from Sinn Féin made, he said. Quickly followed by a demand for an apology. Many readers of indymedia would view this demand as totally hypocritical given that there is no apology forthcoming from the ambassador for the deaths of hundreds of innocent children, the bombing of schools and ambulances and the use of banned weapons. We arent even informed of what the many false accusations and examples of rewriting of history are, we are just told of the ambassador's continued empty rhetoric with no journalistic critique given whatsoever. Dr Evrony said some deputies here would always believe everything Israel did was wrong and everything Palestine did was right" "They have their stereotypes. Dont confuse them with the facts, he said. When you are deep in prejudice and stereotypes you are bound to fall into traps like this. No attempt is given by the journalist to state what the supposed facts are and whether they are truthful or not, instead we are presented with emotionally loaded language from the ambassador that what he is saying (whatever that is) is the facts.

Alan Shatter's role in this shabby article is of the outraged TD who is Jewish and victimised by the Sinn Féin TD with links to the IRA. While not written in the article, the IRA looms strongly in the background of it. Alan Shatter is quoted in the article as stating its particularly appalling to suggest that a member of this House conducts himself in such a manner that resembles the conduct of the chief propagandist of Hitlers Nazi Party, and quite extraordinary that such remarks should be made by a Sinn Féin member about the only Jewish member of this parliament. Again in the article no critique is given just a cut and paste of Alan Shatters remarks. We are not informed of Alan Shatter's long support of Zionism and military attacks against the Palestinian people. Instead the paragraph with the quotation is framed in such a way that it allows Alan Shatter to imply some sort of republican threat against Jewish people.

So what about the Palestinian ambassador? Well the only quotation from the ambassador, Dr Ajjuri, is at the end of the article in which he states that Gaza is a virtual prison, cut off from the world completely, with massive economic consequences amounting to a humanitarian disaster. Which we had already been informed of several paragraphs above by the Israeli ambassador was false accusations and examples of rewriting of history.

This article did not belong on the front page of a respectable broadsheet. The journalist, instead of offering the public a critical eye and analysing the spin from all participants of the committee, merely regurgitated the spin from the participants and focused in on the most scandalous part which was the accusations by the Sinn Féin TD. Now critics of what I say might point out that the journalist in question might be trying to be objective but everybody knows that news stories are inherently subjective. If no analysis is given by the journalist they are merely regurgitating spin in their articles. What this essentially means is that the journalist in question is merely cut and pasting the spin in to their articles and in most cases peddling lies and distortions to the public as a whole. This has worked very well for the establishment in the US where the spin on Weapons of Mass Destruction and the Iraq war emanating from Bush and his establishment were regurgitated without analysis allowing absolute fabrications and distortion of facts to be peddled to the masses as genuine news. The issue of objectivity in the media has often led to ridiculous situations where instead of a critique of the spin we are given two quotations from people from both sides of the debate in the article as if they both were of equal honesty. The Society of Professional Journalists http://www.spj.org/aboutspj.asp removed objectivity from their standards of ethics in 1996 http://www.alternet.org/story/16348/?page=1 However, supposed objectivity remains the standard in the media across most of the world. This takes an important twist when you consider that in many cases PR companies advise political parties and corporations on how to frame their statements and speeches to get their points across (factual or not) and control the debate. This puts community activists and community organisations and even poorer political parties at a considerable disadvantage. The art of spin is more important to the political establishment than the truth or the validity of what they are proposing.

The Irish Times article doesnt belong on the front page of any paper let alone the supposed paper of record. However, dont expect an apology from the Irish Times or the journalist for a sloppy, sensationalist and vacuous article. Although the article highlights the importance of projects such as indymedia for analysis of the spin because, as most of us are already aware, we are not going to get it from the media. https://www.indymedia.ie/article/90365

http://www.indymedia.ie/article/90622
Indymedia Ireland is a media collective. We are independent volunteer citizen journalists producing and distributing the authentic voices of the people. Indymedia Ireland is an open news project where anyone can post their own news, comment, videos or photos about Ireland or related matters.