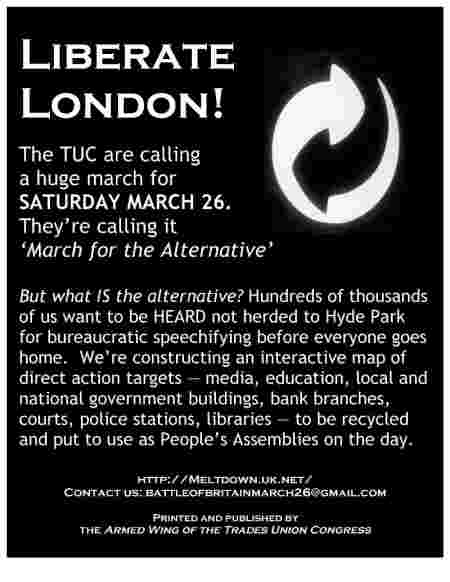 Regional TUCs are expecting 300,000 to converge on central London on March 26. It should be an interesting day. While stewards are being recruited in liaison with police to stop any repeat of what happened to Millbank, therell be thousands of us with other ideas. If an NUS demonstration of 30,000 can accidentally demolish the Tory Party HQ, what might 300,000 achieve?

In January, anarchists from around Britain met in Manchester to form a network of networks called Network X. It was agreed to mobilise for direct action on March 26. This is a major step forward for the anarchist movement, quipped Class Wars Ian Bone, being the first time anarchist groups have agreed to a central command since Barcelona in 1936. A kaleidoscope of groups, many of recent invention, is planning street theatre, effigies and spectaculars for the big day.

In one occupied art college I visited, a gigantic Trojan horse - inevitably a carthorse! - was being constructed by students as an alternative TUC; this will head an early morning feeder procession from Camberwell to join the march.

While sectarian divisions remain, most recognise that the best remedy is joint action. In addition to the various Trotskyist fronts, horizontal networks of all kinds are contributing to a rich tapestry of national and local anti-cuts coalitions. The big idea is that, whenever a town hall is occupied, it becomes a peoples assembly. A still bigger idea is to recycle schools, libraries, workplaces and housing estates as we approach March 26, perhaps even barricading whole neighbourhoods to host peoples assemblies and establish Tory-free zones.

Among other prominent bodies preparing direct action on March 26 is the London Student Assembly, initially led and inspired by students, but now open to everyone. A series of anti-EMA abolition and other anti-cuts demonstrations are being planned by this assembly as stepping stones toward the big day.

Direct action endorsements from trades union and Labour Party branches are yet to come, but I detect a dwindling appetite everywhere for the TUCs determination to restrict us to their speechifying after marching from A to B. Too many of us remember the two million-strong anti-war demonstration of 2003, when we all behaved peacefully and were totally ignored. The RMT wont be the only union to encourage some kind of direct action on March 26.

So what exactly is the plan? One idea, dubbed Battle of Britain, is to distribute 30 or so direct action blocs all along the march - for example, an RMT contingent, a Lewisham Against the Cuts bloc, a Newcastle Student Assembly contingent, and so forth. Then, say, at 2.02 pm precisely, the Battle of Britain begins. We hear a World War II air raid siren accompanied by smoke flares all along the route. At that point, in each bloc, everyone sits in a circle to convene a peoples assembly.

If all goes to plan, each bloc will have prepared by bringing its own megaphone, pair of stepladders, contingent of counter-stewards, hip hop sound system, tea-making equipment, etc. So there would be 30 different peoples assemblies along the route.

The idea is to demonstrate quite simply that we are ungovernable. We do this for an hour, before agreeing to move on. Among other things, the hour is a rehearsal for Earth Hour later that same evening (Earth Hour is the World Wildlife Funds annual synchronised switch off the lights action from 8.30 to 9.30 pm, aimed at cutting light pollution and combating climate change). Brendan Barber (or anyone else from the TUC) could be invited to explain to us why we should follow him to Hyde Park and go quietly home. Then those who wish can proceed in that direction. The rest of us may have other ideas arising from decisions made during the assemblies.

The cuts proposed by this Con-Dem government are savage. Should they succeed, everything weve built since 1948 will be destroyed. Yet there is much good news. School kids are now in the lead, with the rest of the country behind them. This is a weak government, riddled with divisions and lacking a shred of legitimacy. Together we can bring it down. Direct action on the streets - as shown during the poll tax riot of 1990 - is the only language these people understand.

Further information is available on the web at

http://www.indymedia.ie/article/98770
Indymedia Ireland is a media collective. We are independent volunteer citizen journalists producing and distributing the authentic voices of the people. Indymedia Ireland is an open news project where anyone can post their own news, comment, videos or photos about Ireland or related matters.