Answers still outstanding about the Dublin and Monaghan bombings 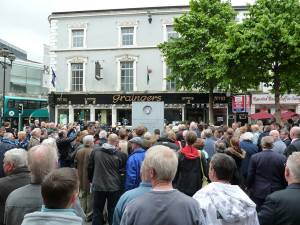 On May 17th 2011, it was the 37th anniversary of the 1974 Dublin and Monaghan bombings, the single biggest loss of life during the 'troubles'.

Justice for the Forgotten (JFF), the organisation of Victims and Relatives seeking justice for the Dublin and Monaghan bombings of 17th May 1974; the Dublin bombings of 1st December 1972 - 20th January 1973 and other cross-border bombings of the 1970s held a wreath-laying ceremony at the Talbot Street Memorial.
Around 300 people attended the event.

This event was a timely reminder that there are still unanswered questions. The ball is now in the court of the British government. It is more than time for them to own up.

http://www.indymedia.ie/article/99814
Indymedia Ireland is a media collective. We are independent volunteer citizen journalists producing and distributing the authentic voices of the people. Indymedia Ireland is an open news project where anyone can post their own news, comment, videos or photos about Ireland or related matters.